Archive for the ‘Recipes’ Category

The witching hour is approaching and Halloween is nearly here! It’s the perfect time to unleash some charming treat ideas for the tricksters in your life – sure to hypnotise, mesmerise and enrapture. Whether you’re braving the eerie night, or warlocking your doors and curling up against the cold, Iain and his team wish you a very Happy Halloween! 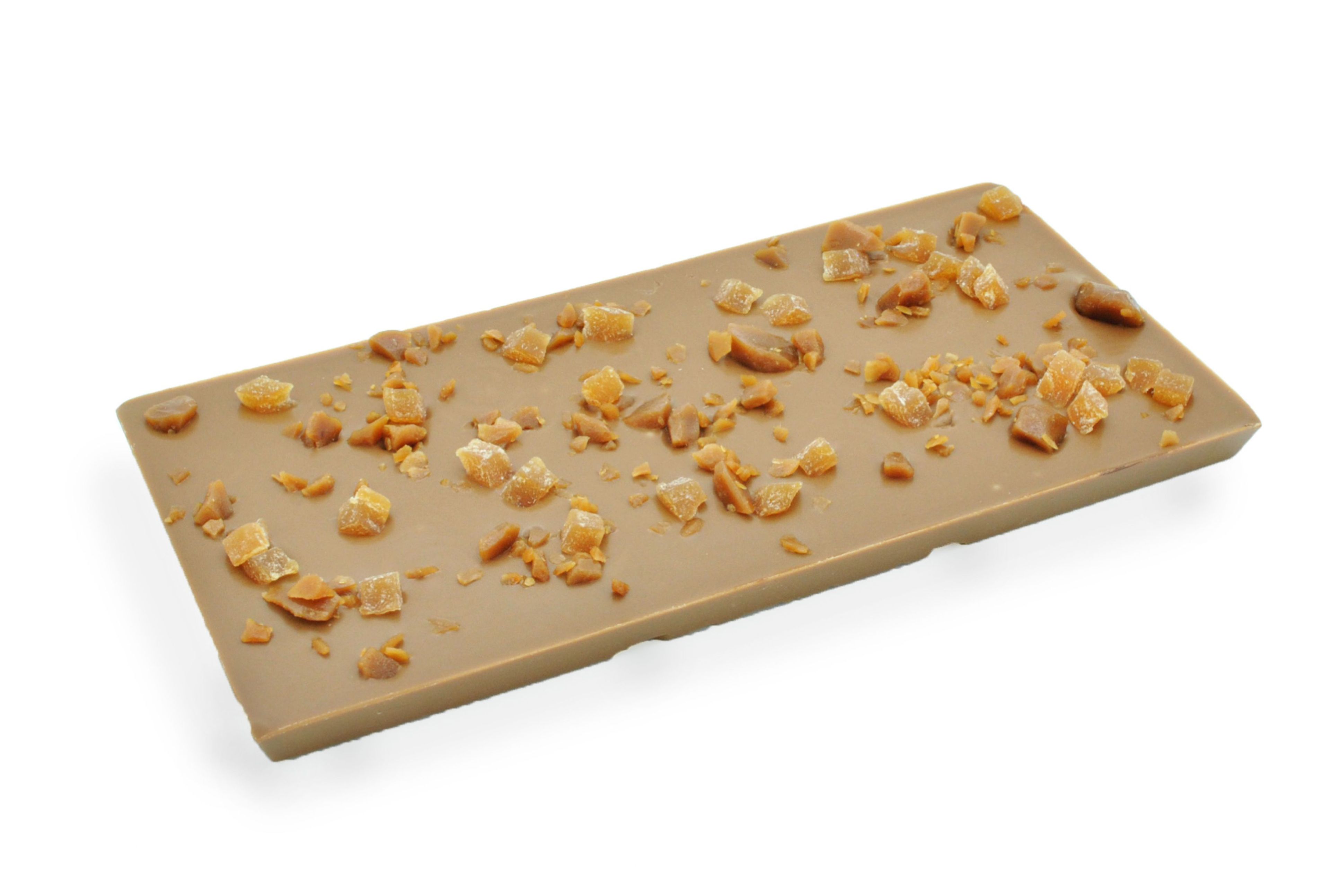 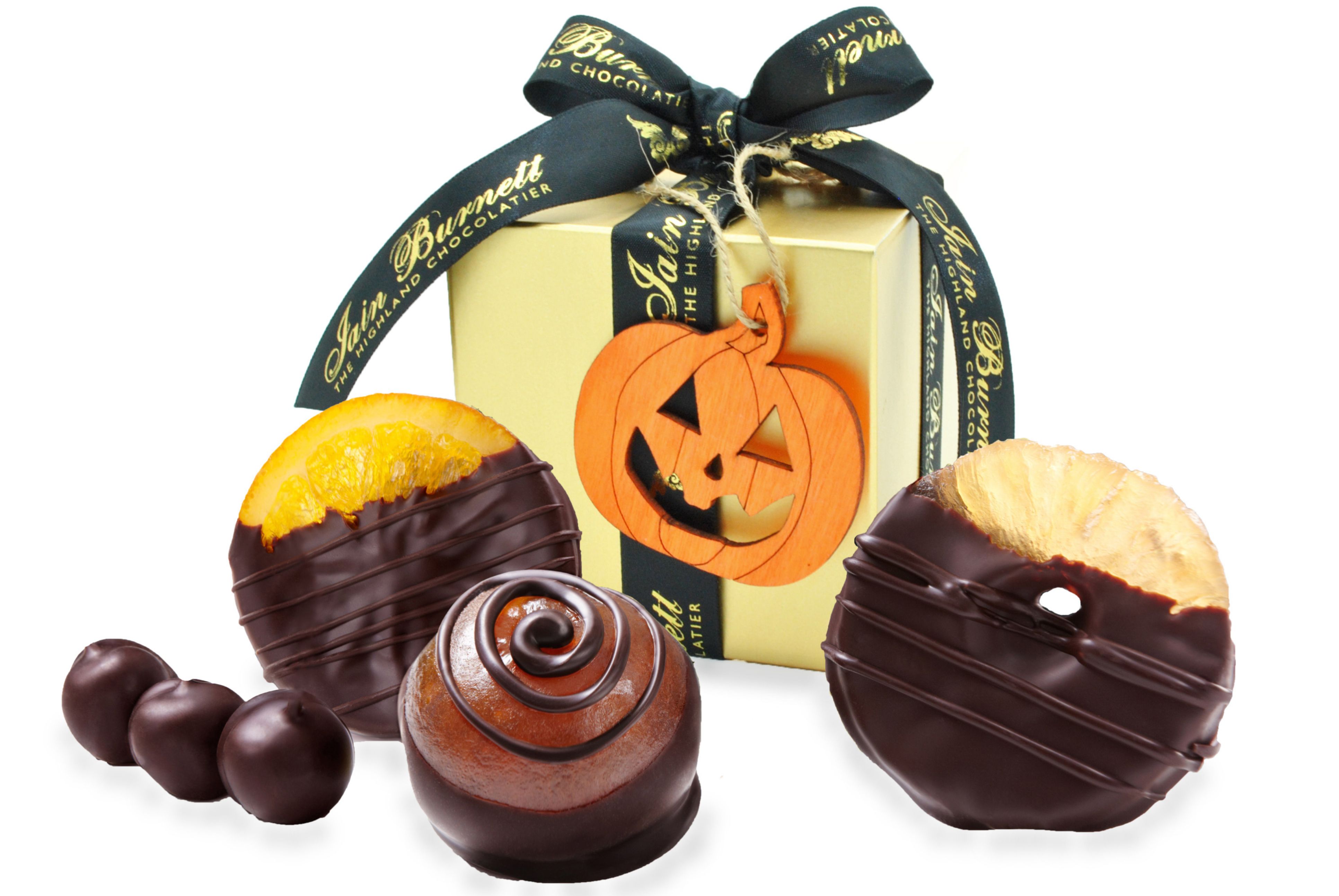 A delicious selection of gently candied, outrageously juicy fruits. Presented in a dazzling gold box, with a branded ribbon and special wooden pumpkin ornament for a festive touch!

Two of Iain’s best-sellers – the Sea Salted Toffee bars! Toffee pieces scattered on milk or dark chocolate, and sprinkled with sea salt to add a beguilingly delicious twist for your tastebuds.

For the ultimate Halloween hot chocolate, use some of Iain’s Dark Hot Chocolate flakes mixed with hot milk. Add in some chili or cinnamon to taste, and a dash of black food colouring for a bewitching brew.

Or, combine some of Iain’s White Hot Chocolate with pumpkin spice mix, if available, or mint. Stir in some green or orange food colouring for a wickedly warming and colourful Halloween treat.

Posted in Chocolate Products, Gems from the Kitchen, Newsletters, Our Chocolate Range, Recipes, Uncategorized | No Comments »

Chocolate, We Think The World of You!

While every day is Chocolate Day at Iain Burnett Highland Chocolatier, the 7th of July marks the annual celebration of World Chocolate Day.  A day when we can all joyfully doff our caps to one of the most beloved foods on the planet. Of course there are countless ways to enjoy the day, but here are a few suggestions from Iain’s corner of the world.

Coinciding with World Chocolate Day, Iain is offering a new Summer Selection Box. A tantalising medley of fruit and floral Velvet Truffles. A wonderful complement of flavours for the long, hot summer days.

Encircled in a white and gold box, these brightly coloured gourmet treats are certain to make your taste buds sparkle like sunshine!

In this hot weather, let your palate do the travelling, with pineapples, clementines, lemons and cherries.

Iain’s selection of dipped fruit is the ultimate way to savour summer.  Fine fruit, delicately candied over days to retain their natural sweetness and juiciness, then hand-dipped and dressed in Iain’s gourmet chocolate.

100% cocoa powder, crafted through a careful process of fermentation, roasting and grinding.

Rich and robust, red cocoa adds an aromatic, bittersweet punch to both savoury and sweet recipes.  Wonderful for those on the lookout for more ways to integrate chocolate flavours into their lives–on World Chocolate Day and every day!

Originating as the Celtic festival of Samhain, where Scots would light bonfires and wear costumes to ward off ghosts, Halloween is now inextricably linked with candy and sweets. However, the intoxicating brew of Halloween and chocolate is actually a relatively recent one.

As traditions from various cultures began to mix, Halloween became the one night of the year where pranks would be tolerated, where tricks ranging from playful to ghoulish might ensue.

The more modern form of trick or treating dates back to the 1930s and 40s, when costumed children going door to door would spirit away with a wide variety of treats, ranging from fruits and nuts, to toys and coins.

In the 1950s, spotting a diabolical opportunity to boost candy sales in the autumn season, candy companies cackled at the chance to cast their spell over the holiday, offering an affordable and convenient reward for witches and wizards appearing on doorsteps.

By the 1970s, chocolate and candy was regarded as the official Halloween fare, and today, approximately £1.5 billion of chocolate is sold at Halloween.

Whether you’re braving the eerie night, or warlocking your doors and curling up against the cold, Iain wishes you a very Happy Halloween.

Elements for a Devilish Potion

For the ultimate Halloween hot chocolate, use some of Iain’s Dark Hot Chocolate flakes mixed with hot milk.
Add in some chili or cinnamon to taste, and a dash of black food colouring for a bewitching brew.

Or, combine some of Iain’s White Hot Chocolate with pumpkin spice mix, if available, or mint.
Stir in some green or orange food colouring for a wickedly warming Halloween treat.

Chocolate has long been known as a comfort food and has been a source of solace for many during stressful times. Chocolate is also associated with romance and is used as a mood-enhancer, but finally it’s being recognised for holding multiple health benefits. Dark chocolate with 70% cocoa really is good for us. Here at the highland chocolatier we specialise in crafting chocolates with single origin dark chocolate which has been discovered to be good for the heart, circulation and brain. END_OF_DOCUMENT_TOKEN_TO_BE_REPLACED

Line a 10” round cake tin with baking parchment. Gently melt butter, all the milk chocolate & 325g of the dark chocolate in a bowl over boiling water. When melted add the cream. In a separate bowl mix the eggs, sugar, vanilla essence and the whisky. Stir in the melted chocolate mixture. Then fold in the flour. Lastly fold in the remaining dark chocolate buttons and the walnuts. Bake at 165 deg C for 45 minutes. Leave in the tin to cool then transfer to the fridge to set the gooey centre. Once set cut into slices. Serve with a hot drink or for a delicious dessert, warm slightly and dust and serve with cream. Dust with icing sugar and garnish with a sprig of mint.

These delightful biscuits were created to be served in Legends Coffee and Chocolate House for Valentine’s weekend – but don’t save them just for Valentine’s Day.  They have a role in many occasions.

Mix together the butter and sugar, until pale and smooth. Add the vanilla extract, then mix in the sifted flour until completely incorporated. Form into a ball of dough.

Dust the surface with flour and roll the dough out to about 5mm . Cut into heart shapes and lay on a baking tray lined with baking parchment. Chill for 15 minutes to rest.

Pre-heat the oven to 160C and bake for 15-20 minutes.  Watch carefully so that the edges do not colour.

Cool on a wire rack.

Meanwhile prepare a sheet of baking parchment and have the decorations to hand.

Break up the chocolate bar and melt in a bowl above a pan of boiling water.

Dip each heart approximately half way  trying to keep a consistent angle.  Before the chocolate is fully set sprinkle with dried raspberry or a decoration of your choice.

Posted in Recipes | No Comments »

This recipe was created to be served as canapés at the launch of The Velvet Truffle Range and proved to be very popular.  It may also be served with mixed salad as light meal.

For 10 Balls you will need

Finely grate 10g of the chocolate.  Remove the haggis wrapping and mix it in a bowl with the grated chocolate.  Roll into ten even sized balls, approximately the size of a walnut.
Prepare 3 bowls – 1 with a beaten egg, 1 with flour and 1 with breadcrumbs.
Roll each ball first in flour and shake off excess, then roll in the egg mixture, lastly roll in the breadcrumbs, shaking off excess and patting firmly to ensure good coverage.

Deep fry the balls until they are golden brown and float to the surface.

Break up the rest of the chocolate bar and melt in a bowl above a pan of boiling water.  Add a little cream to taste.  Serve as a dip alongside the bon-bons.
RETURN

MAKE YOUR OWN IMPRESSIVE DECORATIONS FOR DESSERTS AND CAKES

Ensure leaves are fresh, clean, dry and pesticide-free. If there is any doubt, use the leaves for decoration only. A selection of leaf types and sizes make a more impressive natural arrangement. Choose flattish leaves with pronounced veins on the back for a clearer imprint of the design. Allow a few extra leaves to allow for breakages

200g chocolate will cover around 24 leaves.

Leaves can be made in a variety of colours and flavours of chocolate. We recommend

Lustre Powder though not essential, adds a professional finish.

Use a clean food-safe brush.

For best visual effect use the leaves as soon as possible. Keep cool and dry. Storing in the fridge is not advised due to the risk of condensation causing surface blemishes.

Posted in Gems from the Kitchen, Recipes | No Comments »

Set a heat proof bowl over, but not touching, a shallow pan of simmering water

NOW FOR THE FUN PART

Gently melt the chocolate in the bowl, whisking to mix evenly. Remove from the heat as soon as it is melted. Tilt the bowl and dip each piece into the chocolate to cover about two-thirds. Turn the fruit to coat it evenly, lift out of the chocolate, and gently shake off any excess. Starting furthest away, carefully lay the fruit it on the waxed paper.

If the chocolate begins to cool and thicken, return the bowl to the water bath to heat briefly.

Posted in Gems from the Kitchen, Our Chocolate Range, Recipes | No Comments »

Chocolate ingredients used can be purchased from our shops or our website.

from Corinne Lings, Cook at Legends of Grandtully Coffee House

Chop the onion and saute in a splash of olive oil.  Add tomatoes, tomato paste, dried basil, chutney and stock.  Simmer for approximately 20 minutes.  Blend until smooth.   Melt the chocolates together with the cocoa powder in a bowl over boiling water. Add to the soup and season to taste.

Posted in Recipes | No Comments »